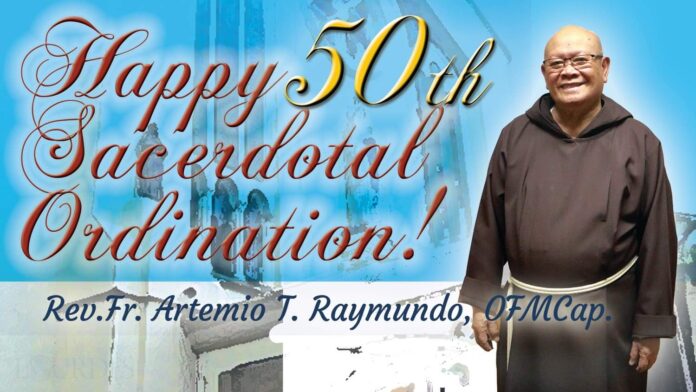 “What tongue, human or angelic, may ever describe a power so immeasurable as that exercised by the simplest priest in Mass? Who could ever have imagined that the voice of man, which by nature hath not the power even to raise a straw from the ground, should obtain through grace a power so stupendous as to bring from Heaven to earth the Son of God?” St. Leonard of Port Maurice

Imagine the souls saved by one priest every time he celebrates the Holy Mass. Or when he hears confession. Or utters kind words to the confused and the ignorant. How many souls could Fr. Ting have been instrumental in saving these 50 years? How many more will he save? We do not know. But we are certain that because of his humble ways, his hunger for learning and teaching, his meticulously prepared homilies, he most definitely hauled in great numbers.

Today we join Fr. Ting as he celebrates the Golden Jubilee of his priesthood. This is his story.

Artemio Tejares Raymundo was born on February 9, to Estanislao and Rosario Tejares Raymundo at San Jose de Buenavista, Antique. They married early. Estanislao was 19 years old, Rosario was 14 years old. They had 14 children. Artemio “” was their 12th child. By the time he was there were nine siblings left, seven girls and two boys. So people thought he was the 7th child. Artemio was the younger of the two boys. His father named him after General Artemio Ricarte y Garcia, the belligerent, brave and “irreconcilable” Filipino patriot.

“Start by doing what is necessary, then do what’s possible, and suddenly you are doing the impossible.” St. Francis of Assisi

Timoy graduated in 1954 at the San Jose Elementary School, and in 1958 at the Antique High School. All his friends were sacristans. He was not. At the behest of his father, Timoy studied to be a Civil Engineer at the University of San Agustin, Iloilo. It was during the first semester of his second year that he felt a great desire, a yearning to join the priesthood.

Why the Lesser Brothers?

Timoy did not know about the Capuchin Order. One day he came across The Sentinel, a Catholic publication. At the centerfold page was a photograph of the occasion of the blessing of Our Lady of Lourdes Seminary at Tagaytay. He felt so inexplicably drawn to it, that he secretly applied.  Fr. Manuel De Izu (religious name), now known as Fr. Manuel Ramirez reviewed his application.

One requirement was the permission of his parents. First, he told his Mama, who agreed. But his Papa strongly disapproved, insisting that he complete his studies at the university.

Since the family was in San Jose de Buenavista, Antique, he and his sister stayed at a dormitory in Iloilo. He reached the point that he felt what he was doing was meaningless and asked his sister Nang for help. He appealed to his Mama, “I am not only the son of my father I am also the son of my mother.” She consented but with much hesitation. Since she was paralyzed, she authorized her daughter to sign. Then he escaped. Luvis, his youngest and only surviving sibling, recalled that when Papa learned that Timoy joined the Capuchins, he turned livid and in his rage, he punched a hole in the wall of their home, screaming at whoever helped Timoy escape. The neighbors heard the commotion and everyone was terrified of Papa’s violent wrath especially that he was a tall, well-built military officer.

It was first time to leave his island. His sisters Maura and Rosita paid for his fare and Rosita met him at the airport. He found his way to Tagaytay. He arrived in since school started in June. By this time his Papa, the Chief of Police, was furious, threatening to sue the Rector because he was only 18 years old, a minor. did not agree. He replied that he would return home only for the summer break. When he did, his father asked him to transfer to a seminary in Iloilo. He returned to Tagaytay without his father knowing it. He escaped again.

“I have separated you from other people, that you should be Mine.” Leviticus 20:26

Timoy entered the Novitiate on May 17, 1962. His formal name was Frater Artemio Aloysius de San Jose de Buenavista. His classmates preferred to call him Ting, short for ‘tingting’ for being too skinny. His Temporary Profession was on May 18, 1963. From the novice garb, he was finally in the brown Capuchin habit.

He, together with six in his batch studied Philosophy from 1963 – 1966 at Kerala, South India. But not without vehement objections from Papa, who demanded his transfer. Br. Artemio found his 3-year stay in Kerala extremely challenging. He learned deeply about poverty. Just like the others who wanted to give up and return to the Philippines, Fr. Artemio was also tempted to transfer because of the difficult environment. But he did not because he had been opposing his Papa all this time that he resolutely decided to grin and bear it. He found strength to persevere whenever he remembered Papa’s objections. There was no turning back. By this time, Papa had transferred to the Land Transportation Office.

Further studies brought him to the city of Pamplona, in the province of Navarra, Spain. Br. Artemio’s main challenge was to master Español. And he did. He pursued and completed Theology from 1963 – 1966. It was in Pamplona that he had his Perpetual Profession on September 17, 1967. He was ordained a deacon on December 1969.

After Ordination, Fr. Artemio returned to the Philippines on June 24, 1970. Then he headed home. At the airport he was met by representatives from of the Diocese of San Jose de Antique. They proceeded to the Cathedral of Saint Joseph for the singing of Te Deum. The next day, he celebrated Mass at home for his bedridden Mama. On June 27, he celebrated Mass at the Cathedral together with Fr. Troy de los Santos and Fr. Plaza. Reception was at a nearby school run by Assumption Sisters.

Fr. Artemio’s Papa, by that time had retired from the service. He was very happy, so proud, and at peace with his son. He invited his friends to celebrate his son’s ordination. Fr. Artemio was able to spend some time with his beloved mother. He told her to offer her sufferings to God for his vocation because that was meritorious.  She passed away three years after his ordination. In hindsight, he realized that his father worried for him while he was in India because he was a sickly boy. Thankfully he did well in while in Kerala.

“I will ponder your precepts and consider your paths. In your statutes I take delight; I will never forget your word.” Psalm 119:15-16

Fr. Artemio took his Masters Degree in Philosophy at the Ateneo de Manila in 1971, but did not finish because he went to Tagaytay. While he stayed at the Saint Anthony Church in Singalong, he founded a youth organization called Kilusang Kabataan ni San Antonio (KKSA), some of whom will be present at the Golden Jubilee celebration. All grandfathers now, they gather from time to time and reminisce the good old days.

From 1972 – 1980, he was Rector for the Saint Lawrence of Brindisi House of Studies, Tagaytay City while teaching History of Philosophy and Educational Psychology at the Divine Word Seminary at Tagaytay. He also served as Definitor (Counselor) from 1976 – 1982.

In 1977, he pursued Franciscan Studies at Saint Bonaventure University in New York.

In 1982, at the age of 40 years, Fr. Artemio was the first Filipino Vice Provincial. Before him all were Spaniards. The Philippines was then a Vice Province.

In 1985 – 1991, he served as Director of Novices at Saint Felix of Cantalice Novitiate House in Baguio City.

In 1991, he was a Catholic Authors Awardee, due to the body of work he produced on Franciscan Spirituality.

He served as Vicar Provincial while staying at the National Shrine of Our Lady of Lourdes (NSOLL) from 2005 – 2008.

Fr. Artemio is currently the Guardian (Local Superior) of NSOLL.

“All getting separates you from others; all giving unites to others.” St. Francis of Assisi

“The Capuchins live together following the rule of Saint Francis of Assisi living in fraternity as brothers without distinction. The distinction comes in terms of office or ministry, as priests or deacons. And because we live in fraternity, there is no reason to seek the outside world.

The NSOLL community has many priests and brothers because of the school and the parish. One purpose was to encourage vocations, but very few responded. Yet the purpose to provide Christian education for the young is fulfilled.”

“Be open to the inspiration of the Holy Spirit. Be firm in your decision. There will be a lot of distractions. Remember that you are not an angel. Be a man of prayer because prayer is necessary. You cannot defeat evil by human means.” In his case, Fr. Artemio knows that “everything is grace.”

Any family members joined the Priesthood?

“Until now I am still waiting. One nephew started, but left after one year.”

“Sanctify yourself and you will sanctify society.” St. Francis of Assisi

Wake up at 3:30 am. Routine includes reading the Gospel for the day. Prayer room at 6:30 am.  Common prayers at 7:00 am. Fr. Artemio emphasized that to be able to teach others to pray, you have to do it yourself. “You cannot teach others to pray without praying.” He feels incomplete if he is unable to do it. The day also ends with evening prayer. Bedtime at 9 pm.

What are your hobbies and interests?

Do you ever get lonely?

“God is always there.” Fr. Artemio says that he has a home in NSOLL. And occasionally he visits Antique and Iloilo.

What is one thing you dream of doing someday?

“Publish books featuring a collection of articles, meditations and reflections as well as his doctoral dissertation.”

Is there one particular experience that made you proud of being a priest?

“Today. This Golden Jubilee makes me very happy. I celebrated my 25th year and my  40th year. I did not expect to reach this far. God gave this to me as a precious gift! What a wonderful grace! “

Preparations for the Canonical Coronation of the Blessed Virgin of Lourdes...

How to Prepare for Live Stream Masses