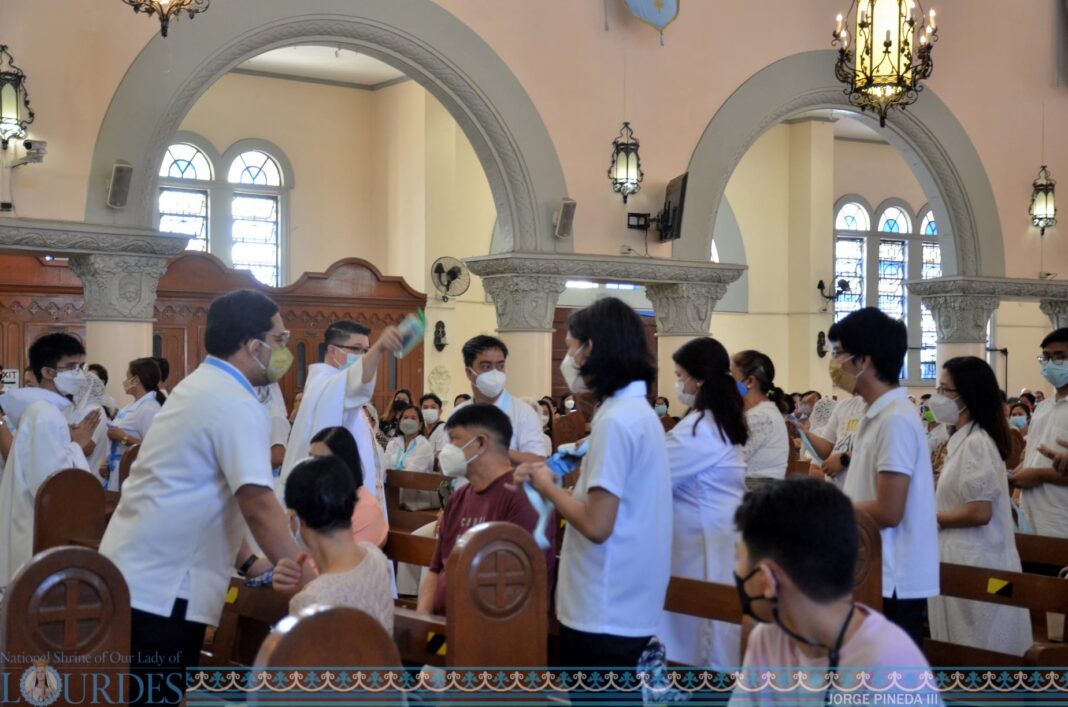 Memorable things happened at NSOLL on the Feast of the Immaculate Conception.

Rev. Fr. Artemio T. Raymundo, OFMCap.  explained the dogma of the Immaculate Conception – How was Mary who was like all human beings in need of redemption conceived without sin?

Some excerpts: “For centuries theologians were at a loss to explain this adequately. A 13th century Franciscan philosopher and theologian, Blessed John Duns Scotus explained with clarity based 3 Latin words: Potuit, Decoit ergo Fecit –It was possible, it was fitting, therefore it was accomplished.”

“Pope Pius IX , on Dec 8, 1854 defined the Immaculate Conception, and affirmed that  – Mary on account of a singular privilege bestowed on her, and in view of the merits of Christ’s death, was preserved from the stain of original sin and came into existence completely holy. And that the Blessed Virgin Mary was created immaculate by God as the new Eve, equal to the first Eve that was created immaculate by God.”

“Four years later the Blessed Mother herself confirmed this when she said to Saint Bernadette in Lourdes, “I am the Immaculate Conception.”

“The angel Gabriel was expressing a unique state of grace that far surpasses the creation of all men and women. Even to the angels – Her soul,  spirit and body were immaculate because of her immaculate conception.”

“Sisters and Brothers, not only was the Virgin Mary immaculate in her conception, but remained faithful and immaculate to God until the end of her earthly life. The dogma of the Immaculate Conception tells us something very positive – God is stronger than sin. Where sin abounds, grace abounds even more – from the letter to the Romans.”

“Three words in the great life of Mary. ECCE – Behold. FIAT – Be it done unto me according to your Word. MAGNIFICAT – My soul proclaims the greatness of the Lord. These reveal the mystery of Mary saying yes to the Incarnation.”

“We can also say this to God –  Sisters and Brothers. But our fears keep us from doing so. It is by the grace of God is what allows things to happen. We must be open to His grace. If we could say it in our own lives then you will be following Mary in total dedication to God.”

During the 9 AM Mass.

During the 12 noon Mass.

The Confraternity of Our Lady of Lourdes installed 29 new members. Congratulations! See the Album.

Motorcade Covering the 9 Barangays of the Parish at 5 PM.

Rev. Fr. Jefferson E. Agustin, OFMCap, Parish Priest and Rectror of the National Shrine of Our Lady of Lourdes blessed the people. To mark the end of the Year of Saint Joseph, the life-sized image was a fitting partner to the replica of the canonically crowned image of the Blessed Mother. It was the first time this beautiful image was used in motorcade.

Photo Story of the Motorcade on December 8, 2021, the Feast of the Immaculate Conception

NSOLL’S “EVANGELIZERS OF THE DIGITAL AGE” GO TO THE FORE

Role Play: An Essential Training Tool for the Pre-Synod Volunteers